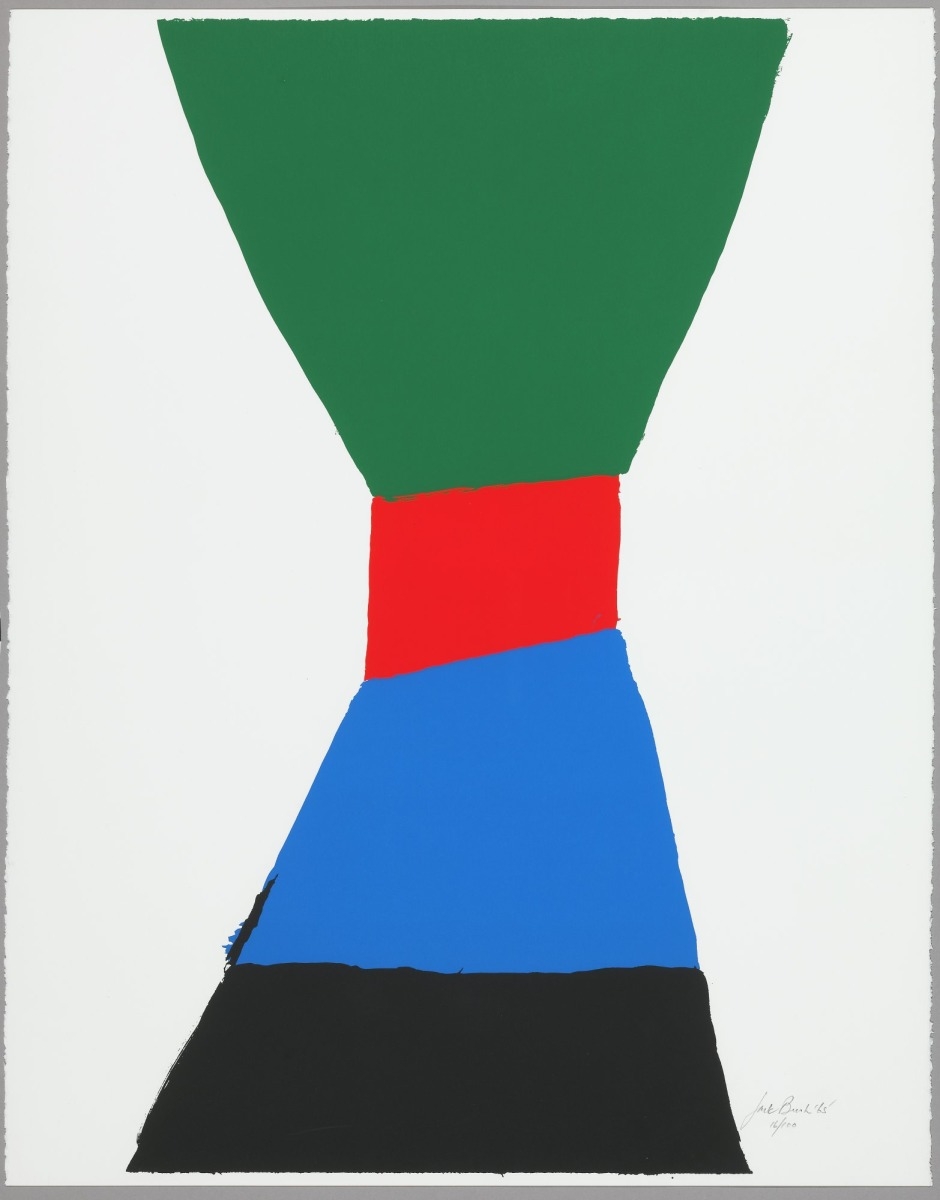 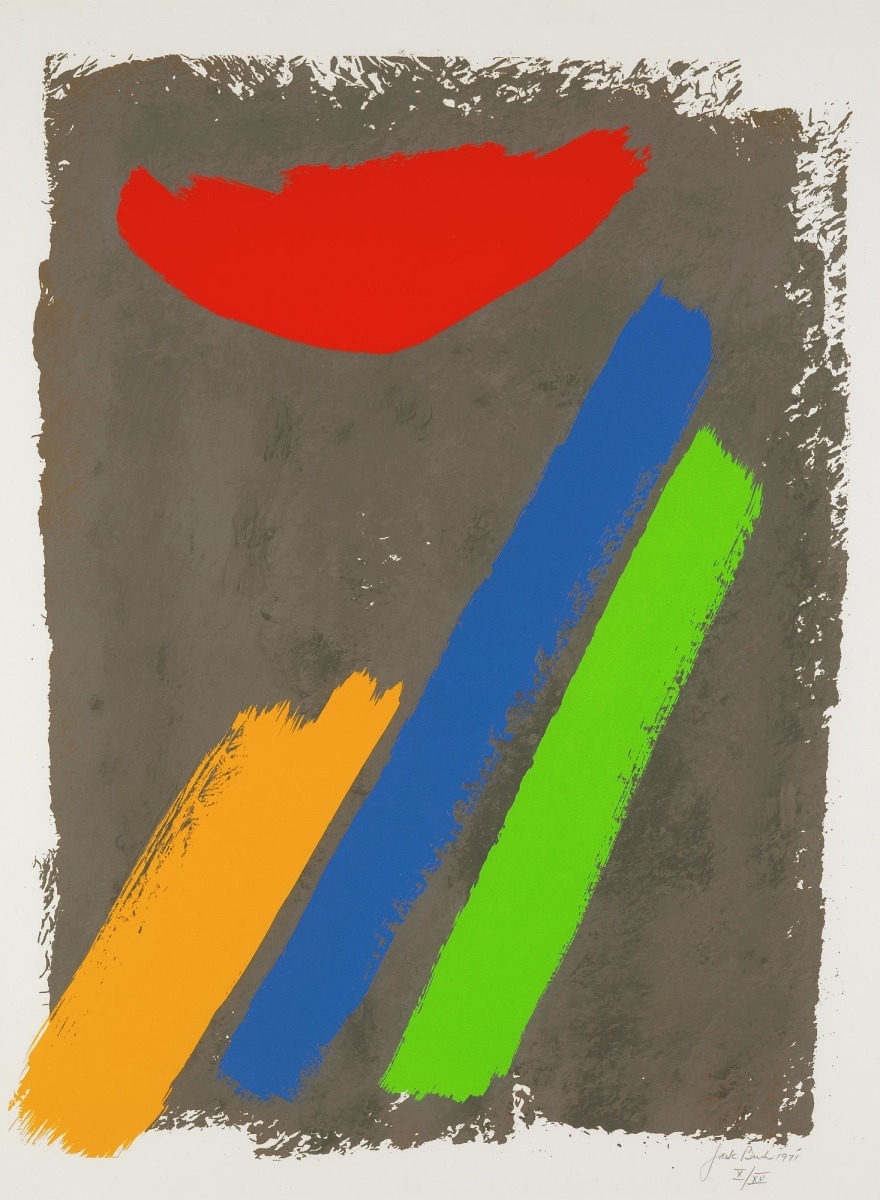 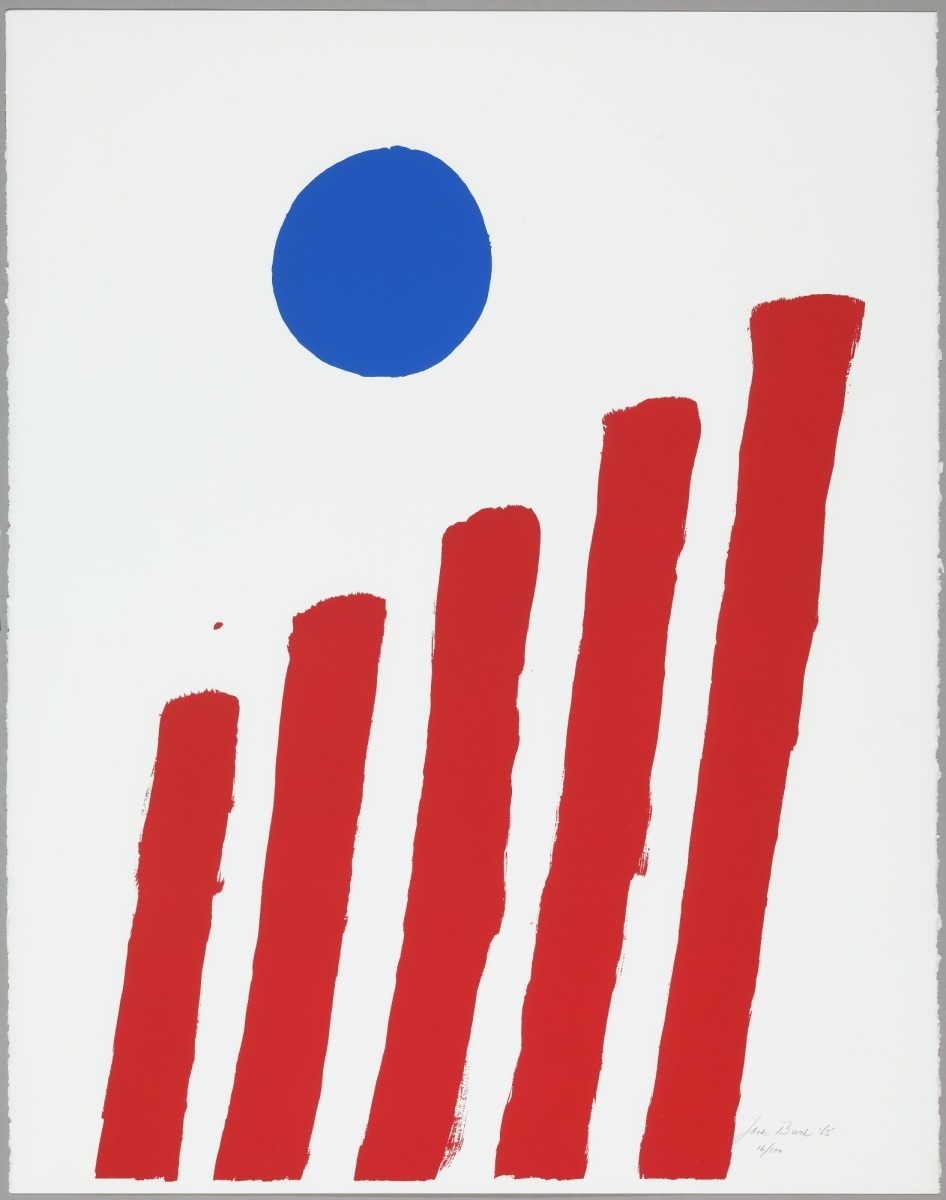 Jack Bush is best known for his abstract paintings done between the 1950s and 1970s. He represented Canada at the 1967 Sao Paulo Bienal and the Art Gallery of Ontario toured a large retrospective exhibition of his work in 1976. Bush created advertisements and illustrations for 42 years before devoting himself full-time to painting in 1968.

As a young man in Toronto in the 1930s, Bush ran a commercial art business and took night classes at the Ontario College of Art. During this period he had very little exposure to modern European art, and, like most other Toronto painters at the time, was primarily influenced by the Group of Seven. The decorative designs and areas of flat colour of Toronto-based artist and designer Charles Comfort also influenced Bush's early painting. After seeing abstract art in Toronto and New York Bush began to experiment with abstraction himself in the early 1950s

Bush was a member of the Toronto artist group Painters Eleven who banded together in 1954 to promote abstract painting. Through this involvement he met the influential New York City art critic Clement Greenberg. Bush was encouraged by Greenberg to abandon his Abstract Expressionist style characterized by hovering amorphous shapes on the picture plane. He would simplify his composition by using an all-over coverage of thinly applied bright colours inspired by his watercolour sketches. His work is based on an abstract record of his perceptions. He did not expect the viewer to see the flower or hear the music that inspired his work, but only to share in the feeling through his painting.

Summer, No. 3 (1956) is an example of Bush's early abstract work. He claimed that he wanted to paint like the American painters, but by his own admission, was never able to imitate their style. In hindsight, he said , "The difference was 'Bush,' and I just couldn't get rid of it ... fortunately."

Jack Bush
Investment Report
Need more data, analytics and research? Luckily ArtVenture has written an in-depth investment report on this artist.
Explore the Reports
Comparison to Canadian Art Market Trend
5 YR
10 YR
MAX
The Art Market Comparison
The graph compares the yearly average hammer price of Canadian art with the artist's average yearly price. A value of zero means there weren't any sales that year.
Canadian Art Market
Jack Bush
Comparison to S&P500 Trend
5 YR
10 YR
MAX
The S&P500 Comparison
The graph compares the yearly performance of the S&P500 with the artist's average yearly price. A value of zero means there weren't any sales that year.
S&p500
Jack Bush
Artist Performance
5 YR
10 YR
MAX
Artist Performance
The graph evaluates how the artist's lots sold compared to their low and high estimates on auction.
Hammer Price
Low Estimate
High Estimate
Artwork Size
Artwork Size
The graph plots the different sizes of the artist's work so you can clearly identify the most valuable and rare artwork size.
Top Realized Price
Pieces Created
Price Sold on Auction
Price Sold On Auction
Understand the median prices of the artist's work as it was sold on auction. The seperate price points allow you to understand the price that the majority of pieces are bought and sold at.
Editorial
BYDealers November 5th Recap
We breakdown the Post-War and Contemporary auction at BYDealers on November 5th. From sell-through rate to previous auction data, our infographics cover it all.
By ArtVenture
Nov 16, 2018
Why Invest in Guido Molinari Now?
What’s the state of Guido Molinari market? How long does it take to resell? What’s the evidence of return & price volatility?
By ArtVenture
Nov 16, 2018
More Artists
Marc-Aurele Fortin
1888 - 1970
André Biéler
1896 - 1989
Tom Dodson
1910 - 1991
Hortense Gordon
1881 - 1961
David Milne
1882 - 1953
Emily Carr
1871 - 1945
Cornelius Krieghoff
1815 - 1872
Tom Thomson
1877 - 1917
Jean-Philippe Dallaire
1916 - 1965
Daniel Erban
1951 -
Fritz Brandtner
1896 - 1969
Frederick H. Varley
1881 - 1969
Guido Molinari
1933 - 2004
William P. Ewen
1925 - 2002
James Hervey McDonald
1873 - 1932
Margaret Luke
1901 - 1967
Oscar Cahen
1916 - 1956
Paul V. Beaulieu
1910 - 1996
Kittie Bruneau
1929 -
John Mead
1921 - 1998
Leon Bellefleur
1910 - 2007
William Ronald
1926 - 1998
Jack Bush
1909 - 1977
George Alleyn
1931 - 2004
Kazuo Nakamura
1926 - 2002
Arthur Lismer
1885-1869
Marcel Dzama
1974 -
Jean Paul Lemieux
1904 - 1990
Alexander Jackson
1882-1974
Lionel Fitzgerald
1890 - 1956
Lawren H. Harris
1885 - 1970
Sorel Etrog
1933 -2014
Harold B. Town
1924 - 1990
Disclaimer
We focus on previous auction data, not primary market sales. Our data may be incomplete or slightly inaccurate. Although we have comprehensive historical data on each piece, artist, their work, and their series drastically differ based on the artistic content, condition of the piece, colouring, methods, and many other factors. We therefore cannot guarantee that we, ArtVenture, can appraise or give you an exact representation of the future price and performance of the artwork and recommend you not to put undue reliance on this data.
©2018 ArtVenture Analytics. All rights reserved.